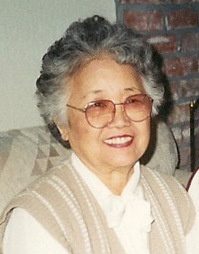 Akiko (Betty) Kato passed away peacefully on Friday May 27, 2022 at the age of 97 at home surrounded by her loving family.

Akiko was born in Sacramento, CA on September 19, 1924 to Genichi and Yoneko Ishida. She was the oldest of 5 siblings. During a family trip to Japan to visit relatives the US was drawn into the war and because of this her family was not able to return to the States. She met her future husband, Tadaaki, while in Japan and had three children, Setsuko, June, and Tad. By 1954 they decided to start a new life in the States and settled in Saratoga, CA where they had an additional 5 children. In 1966 they moved to Watsonville, CA and with many years of hard work and sacrifices they built a lasting flower business, Kato Cut Flowers, Inc. that sustained and provided for their family for 45 years. She enjoyed cooking elaborate food for special occasions, sewing, knitting and crocheting. After retirement, they enjoyed traveling with their friends to Japan, Europe, Canada, China and Hawaii. She also loved playing the slots in Reno. In her later years she enjoyed her word search puzzles and time with her great grandchildren.

A Memorial Service will be held at the Watsonville Buddhist Temple at a later date but is restricted to family due to covid.

To send flowers to the family in memory of Akiko Kato, please visit our flower store.