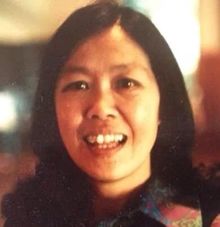 Passed away peacefully in her sleep after a long and courageous battle with Parkinson's on May 28th.
She was comforted by her family at a care facility.

Alice married Ernest Wong on August 15, 1948 in San Francisco. They had three wonderful boys, Michael (Kathy), Steven (Debbie) and Kelly. She also leaves behind six grandchildren Devin, Megan, Emily, Margo, Melissa, and Patrick. Alice worked as a steno typist and as the principal's administrative assistant at Watsonville High School until she retired in 1987. She and Ernie liked to travel to such places as China, Hawaii and Europe. She also was a doting grandmother who never missed a chance to take care of all six of her grandkids who she loved and cared for so dearly. She will be missed not by just her family but to all her knew her and her big smile! Alice's wishes of not having a memorial service will be honored.

To send flowers to the family in memory of Alice Wong, please visit our flower store.