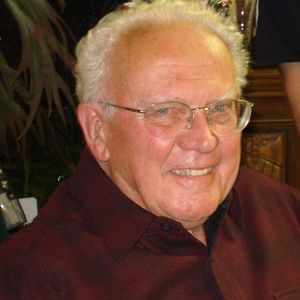 Allison Lewis Rider passed away peacefully on November 20, 2016 surrounded by family. During the last months of his life his primary caregiver was his grandson Luke Dwyer. Allison was born in Watsonville, CA, April 7, 1926, to Isabella Fraser and Homer Allen Rider. The youngest of 4 children, his only sister Kathryn (Kay) was a doting and loving sister until she passed away recently at 99+ years old. He was also preceded in death by his two older brothers Bruce and Clinton. He graduated from Watsonville High School and then served in the army, where he was stationed in Germany days after the end of WWII in Europe. He was thankful that he saw no action and made the most of his deployment, he was a Master Sergeant at the time of his honorable discharge. Like his siblings before him he attended U.C. Berkeley. When he moved back to Watsonville he worked in the family business, H.A. Rider & Sons. He met Beulah Mae Ford, and they married on February 14th, 1954. They began their married life in Corralitos where they raised their family. Allison designed their modern family home which they moved into in 1965. They were to spend the rest of their lives together there.
When Allison was in his late forties, he suffered a heart attack, and decided that a quieter career would be better for his health. He became a certified clockmaker and owned shops in Santa Cruz and Corralitos. He made beautiful mantle clocks and repaired clocks of all types, from Grandfather clocks to Cuckoo clocks. He also taught the skill to his youngest son, Ron. In his younger years, Allison was a DeMolay and later found time to volunteer many hours to the Corralitos Padres. He served on the Pajaro Valley School Board, was a member of Rotary, and a member of the Monterey Bay Chapter 70 of the National Association of Watch and Clock Collectors. On top of all that, he developed the hobby of candy making, a process that was, and continues to be, a delicious family tradition.
Allison was a kind and patient father, grandfather, and uncle. The family home was a safe haven not only for his children, but for others who needed a place to stay, to get a hearty meal or just to have a shoulder to lean on. He enjoyed traveling to many states and countries over the years, some of his most memorable trips included climbing up the clock tower of Big Ben in London, and a summer road trip he and Beulah took their school aged children on across the US and Canada.
His son Ken preceded him in death. He is survived by his wife Beulah, his children Deborah Rider, John Rider (Jeannie Durksen), Ron Rider (Laurie) and Alice Rider Dwyer (Richard), his grandchildren Courtney Peterson (Stace) of Santa Monica, CA, Joel Rider (Rebecca) of Aptos, Luke and Ciara Dwyer of Corralitos, and his niece and foster daughter, Traci Meidl (Craig and children) along with numerous nieces, nephews, great nieces and great nephews. The family would like to extend special thanks to caregiver Kuini Arthur for her care of both Beulah and Allison.
In lieu of flowers, the family asks that donations be made to the Pajaro Valley Historical Association, the Corralitos Padres or a charity of your choice in his name. A celebration of life will be held on December 30th at the Corralitos Community Center, 35 Browns Valley Road, Corralitos, CA 95076 and will begin at 3pm.

To send flowers to the family in memory of Allison Rider, please visit our flower store.