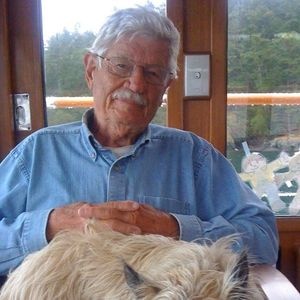 At the young age of 17, Al joined the Navy to pursue his passion for aviation. At the completion of flight school, he served in WWII, Korea & Vietnam, earning the Distinguished Flying Cross in Korea. Following his 22-year Naval career, Al worked as an Advertising Salesman for Pacific Bell.

Al lived an adventurous life and was a storyteller. From "short cuts" on road trips to roughing it camping and flying his small plane through a lightning storm, he was always up to something. In retirement he continued living his dream taking his boat on adventures all over the U.S. and Canada with his wife Mary, and their dog, Charlie. Some of their favorite trips included cruising the San Juan and Gulf Islands, Alaska and the Intercostal Waterways. Al was a member of the Navy Yacht Club, Everett leading cruises into Canada. Flying and boating were passions that he passed onto and shared with his children and grandchildren. He had a generous heart, willing to give of himself.

Al loved his God, country, and family and was a hero, father, grandfather, aviator and yachtsman. He is survived by his wife, Mary of 48 years, and his children Linda Goldbum of New York, Doretha Irving of Washington, Ashli Sturgill of California & Noah Fox of California and their spouses. Al is also survived by 13 grandchildren, 6 great-grandchildren, & 1 great-great grandchild. He was preceded in death by his sisters, Mildred Bennett and Joaquina Sadlier, and his son Alwyn Fox III.

The family would like to extend a special thank you to Providence Hospice of Snohomish County for all their loving care and support over the past six months.

To send flowers to the family in memory of Alwyn Fox, please visit our flower store.