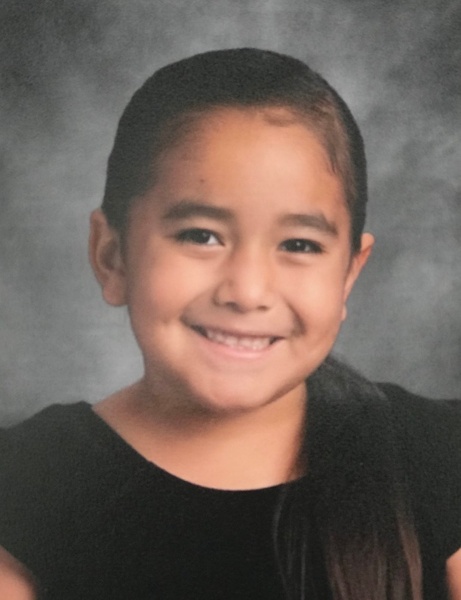 An avid reader, mathematician and “real” princess, Aniah Aguillon-Silva left her physical body on August 31, 2018. At the same time, Aniah left us with an inspiration to fight for what is right and take on even life’s most difficult challenges with grace and dignity ... like a real princess. Aniah will be forever loved by her parents Abraham Aguillon and Guillermina Sliva; her sister Ariana; her brother Angel; her grandparents; cousins; and friends at Ann Soldo Elementary School in Watsonville. Seven-year-old Aniah loved both the profound and the simple things in life. She loved reading and learning, asking “why”, and had a deep sense of justice. On most days, she could be seen with her Papa going to the park and getting ‘’mini bananas.” With her princess smile, Aniah could be seen lovingly forcing her big brother Angel to play dolls with her ... just one more time. These simple moments of love and connection will live on through her beloved family, friends and the community who grew to love her more and more every day. One example of Aniah’s quest to figure out what is right and true came at Jacob’s Heart one afternoon when the volunteers dressed up as princesses for Aniah. Seeing the ‘’princesses,” Aniah whispered in her Papa’s ear, “Those aren’t the real princesses, they’re fake.” When it was revealed that she would be going to Disneyland, she was excited because then, she’d get to see the real princesses. Even after Aniah lost her ability to speak, she continued to speak loudly with the force of her will, just like her Mama taught her. At every twist and turn in her seven years here on earth, Aniah put up a fight for what is right ... just like real princesses do. So, let’s all be real princesses for Aniah. Let’s call out what is true. Let’s fight for what’s right and smile with hope even during the toughest times. Aniah’s family would like to invite those who will continue to love Aniah to celebrate with them on Monday, September 10 from 5 - 9 pm at Ave Maria Memorial Chapel, 609 Main Street, Watsonville. And on Tuesday, September 11 at 10 am for Mass at St. Patrick’s Church, 721 Main Street, Watsonville.

To send flowers to the family in memory of Aniah Aguillon-Silva, please visit our flower store.