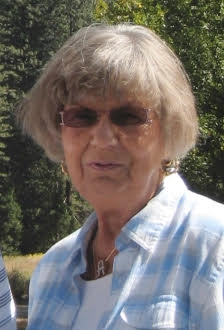 Ann “Gagi” Johann, long time resident of Watsonville, died peacefully, surrounded by her family on Tuesday, September 4, 2018. She was 86.

Ann was born in Watsonville, California on May 19, 1932 to John and Anna Lucich. A graduate of Moreland Notre Dame, Ann married Robert (Bob) Johann in 1953, one month after he returned from the Korean war. After a few years working at local bakeries, Ann and Bob, along with Bob’s Brother Harold and wife Jeanne, purchased Bake-Rite Bakery in 1957. Their delicious cakes and desserts were a Watsonville staple for more than 40 years. Ann was particularly proud of their signature Dream Cake.

After retiring in 1998, Ann devoted more time to her RV travels and enjoyed the many friends she made along the way with her husband and their faithful canine companion Cody. When not on the road, she enjoyed spending time with her family, always the center of lively discussion.

Ann is survived by her children Karane (Jerry) Fischer and Rob (Janet) Johann; her grandchildren Joshua (Suna), Christopher (Kathryn), Ami, Jessie, and Sarah Fischer, Brent and Julia Nicholson, and Matthew Johann, and great grandchildren Thomas and Erica Lock and Hunter Nicholson. She also leaves behind her cousin Anita, her sister Catherine Duncan, her sister in law Jeanne Johann, and numerous nieces and nephews. She was preceded in death by her husband Robert and son Jim Johann.

Ann was a woman of faith. She was also a strong advocate for and supporter of Catholic education. In lieu of flowers the family has asked for donations to the Moreland Notre Dame scholarship fund.

Ave Maria Memorial Chapel has been entrusted with the funeral arrangements. There will be a viewing from 5-9pm on Wednesday September 12th with Rosary at 7pm. Funeral mass will be held Thursday September 13th at 10am at Our Lady Help of Christians Church with interment to follow at Valley Catholic Cemetery.