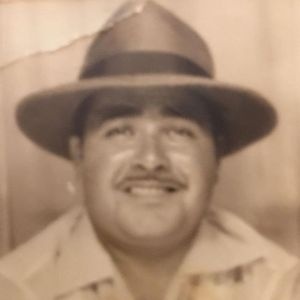 On March 1, 2017 Anthony Aguilar Ontiveros peacefully passed away surrounded by his family in Watsonville. He was 88.
Anthony was born on October 11, 1928 in Winfield, Kansas. He enjoyed many aspects of life especially family festivities. Anthony had a loving charismatic demeanor and loved a variety of music and his sport was dancing to corridas and cumbias as well as singing along with the mariachi and most favorably enjoyed his black walnut ice cream and all of his many pets. Anthony was a father and god father to many and will be truly missed by all.
He was preceded in death by his parents; Martin and Teodola Ontiveros and his two brothers; Manuel-Mo, Ricardo-Pini.
Anthony is survived by his wife, Francisca Lujan Huerta and his children; Leticia, Anthony Jr. (Yvonne), Elvia and Gilbert (Luisa) Ontiveros. He is also survived by his siblings; Gilbert-Rana, Fidel, Racquel-Raca, Esther-Tito, Sara, Consuelo-Chelo Ontiveros and his 15 grandchildren and 21 great grandchildren and many nieces and nephews.
Visitation services will be held on Thursday, March 9, 2017 from 5-9 PM at Ave Maria Memorial Chapel. A final blessing ceremony will be held on Friday, March 10, 2017 at 11 AM at Pajaro Valley Memorial Park, 127 Hecker Pass Rd.

To send flowers to the family in memory of Anthony Ontiveros, please visit our flower store.