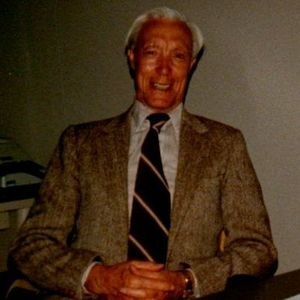 Arnold Hamilton, a longtime resident of Watsonville went to be with God on 11-24-15. He recently celebrated his 100 birthday in August with many of his family and friends.
He was active in the California State Retirees Chapter 36 and the California State Employees Assn. having served as a Director in the 1980's. He was also a member of the Masons, Soquel/Santa Cruz Chapter, a member of the VFW and American Legion. He also served in various offices in the International Association of Workers in Personnel. He retired from the Employment Development Department where he was manager of the Watsonville Office and previously the Gilroy Office.
He loved gardening and working in his yard as well as being an avid handyman. He loved being a parliamentarian for several of his organizations and studying Roberts Rules of Order.
He is survived by his wife Marilyn Hamilton, Grandsons Doug, Doyne, and Dale Richardson of Texas, Sisters-in-Law Gerri Kall and Ardeen Hamilton, Stepsons David and Craig Ferrasci, Great Grandchildren Brianna Stevens, Tanner Richardson, Kannon Richardson, Dianna Richardson, step grandsons Jason and Ryan Ferrasci John and Tim Shaw Cathy Thompson, Frank Gonzales and Adam Covarrubia and many nieces and nephews.
Graveside services will be held on Wednesday, December 2, 2015 at 1:00 PM at Pajaro Valley Memorial Park, 127 Hecker Pass Road.
No flowers please. Send donations to the California State Employees Foundation, 1108 "O" Street. Sacramento, CA 95814 or St. Labre Indian School, Ashland, Montana 59004 or our favorite charity.
Arrangements have been entrusted in the care of The Carroll Family of Ave Maria Memorial Chapel, www.avemariamemorialchapel.com

To send flowers to the family in memory of Arnold Hamilton, please visit our flower store.