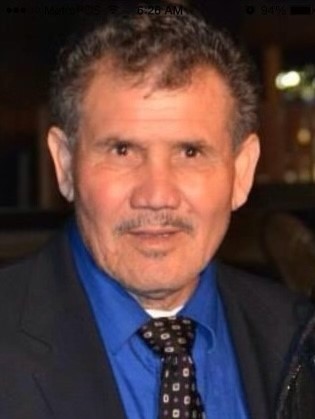 He was born on March 21, 1941 in Moctezuma Sonora, Mexico to Jose Barcelo Bojorquez and Maria Del Rosario Moreno Marquez. He was the youngest of seven children.

In the 1960’s Benito came to the United States as a Bracero where he worked in agriculture for many years. In 1965, he married the love of his life Maria Luisa and they settled in Watsonville, CA where they raised their children.

In 1983 he became a member of Iglesia de Jesucristo Templo Betania where he accepted our Lord Jesus Christ as his savior.

He enjoyed watching boxing and was an avid fan of the San Francisco Giants. Benito loved music and his passion was singing at church. Anyone who knew Benito was touched by his love, affection, and simple way of being. He will be remembered for his love, kindness and generosity to his family and friends.

He is proceeded in death by his Beloved wife Maria Luisa and his Beloved grandson Félix Isaac “In” Villegas.

He is survived by his seven children Lorena (Jesse), Jose (Diana), Arturo, Beny (Mary), Ana Lilia (Félix) Sandra (Jake) and Abraham. His two brothers Ignacio and Gregorio Barcelo, five granddaughters, twelve grandsons and one great granddaughter, as well as his extended family and many friends.

Benito will be missed more than words can describe and will be deeply missed by those he left behind.

Service on Friday, November 19, 2021 at 10 am at the United Presbyterian Church with burial to follow at Pajaro Valley Public Cemetery located at 2445 E. Lake Ave Watsonville, CA.