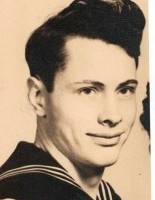 Known to everyone as “Bill,” he was born on June 9, 1926 to Noah Anderson (Chick) Goodson and Samuella (Sammie) Goodson in Amarillo, Texas.

Bill was proud of being a World War II Veteran in the U.S. Navy on the USST Tennessee Battleship as a Gunner’s mate, Third Class GM3/C.

He fought in all the major pacific theatre battles including the liberation of the Philippines, Iwo Jima, Okinawa and numerous other World War II battles.

He worked for Jolley’s Jewelers for 26 years as a watchmaker/repairman before his retirement in 1985. Bill was a resident of Watsonville for 65 years.

He was a lifetime member of both the Veterans of Foreign Wars Post 1716 and the Pajaro Valley Rod & Gun Club.

He is survived by a son Bill (Lizzie) Goodson of Watsonville, Grandson Chris ( Chrissy) Rubio of Slidell, Louisiana.

He was preceded in death by his beloved wife, Grace Lorena Goodson, a daughter, Diana Rubio Allemand and Granddaughter, Kelly Rubio.

The family would like to extend our sincere gratitide to Jenell, Matthew, Nicole, Gabby, Pretzel, all the CAN’s and Staff at the Watsonville Post-Acute Center, Dr. Frank Ravago, and Ave Maria Memorial Chapel.

In lieu of the current medical enviorment a private family graveside service has taken place and interment at the Pajaro Valley Memorial Park.

If desired, memorial contributions may be made to the local VFW Post 1716, Pajaro Valley Rod and Gun Club or favorite Charity of choice.

To send flowers to the family in memory of Billie Goodson, please visit our flower store.