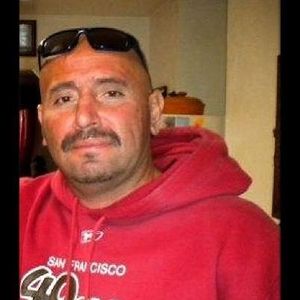 Carlos Gomez
It is with heavy hearts we share the loss of our beloved son, brother, uncle, nephew, cousin and friend Carlos Gomez.
Carlos was born July 29, 1966 and was called home by our Heavenly Father January 3, 2014.
He leaves behind five sisters Adeline Fuentez, Alyce Pagano, Isabel Arreola, Esther Saenz, Patricia Gomez and four brothers Vince, Phil, David and Frank Gomez.
He was preceded in death by his parents Jesus and Pauline Gomez. Carlos attended local schools including Saint Francis and Monte Vista Christian.
He was passionate about feeding the homeless, the 49ers, SF Giants, family gatherings, BBQ's, landscaping and bike riding.
He lived life serving others and continued to do so through his passing by being and organ donor. He was a selfless, humble man with a huge heart. He will be sorely missed.
A Celebration will take place to honor Carlos on Saturday, January 11, 2013 at 1:00pm at the Church of the Nazarene, 710 Green Valley Rd., Watsonville.

To send flowers to the family in memory of Carlos Gomez, please visit our flower store.