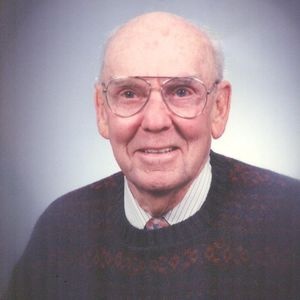 Clarence Earl Totten, of Watsonville, CA passed away peacefully at his home surrounded by his wife and children on April 29, 2014.
He was born in Aromas, CA to Earl and Sadie Totten on August 24, 1916. He lived in Aromas until 1955, when he moved to Watsonville for the remainder of his life.
Clarence attended grammar school in Aromas, Hollister High School, where he played football, and Hartnell Junior College. He followed in his father and older brother's footsteps by hiring out for the Southern Pacific Railroad in 1937 as a brakeman/conductor. He retired after 39 years of injury free service.
He was a member of the Aromas Community Baptist Church where he taught Sunday School, and was a member of the First Baptist Church of Watsonville where he served as a deacon and usher. He was a member of SIRS.
Clarence enjoyed traveling, camping and boating at Shasta Lake. He was an avid Stanford "Indians," SF Giants and SF 49er fan.
He was a loving and cherished husband, father and grandfather. He was known for his sense of humor and loving kindness to all.
He was preceded in death by his father Earl and step mother Mary, his mother Sadie Renquist, his brother Frank, sister-in-law Carol and son-in-law Jerry Goodwin.
Mr. Totten is survived by his wife Merna (Wilson) of 73 years, daughter Linda Goodwin, daughter Diane (Tom) Loney and son, Tom (Cindy) Totten. He also leaves behind five grandchildren; Barbara (Dean) O Malley, Tom (Lana), Blake Loney, Jeff (Denise) Goodwin, Kimberly McTague, 7 great grandchildren, a niece and two nephews.
A special thanks to his longtime caregiver, Isabel Perez, and his new friend and aide, Martha Krick.
We wish to express our gratitude to Dr. Jeffrey Mace and his staff for their professionalism and many years of tender loving care.
Memorial Service will be held on Saturday, May 10, 2014 at 11:00 AM at First Baptist Church, 101 Madison Street., Watsonville.
In lieu of flowers you may make a donation to the American Lung Association or the charity of your choice.

To send flowers to the family in memory of Clarence Totten, please visit our flower store.