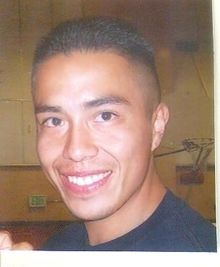 Daniel Manuel Cadenas, also known as "Danny Boy" was born on February 9, 1983 and entered into Heaven on July 15, 2014.
He was born and raised in Watsonville, CA.

Danny was an avid exerciser, always accompanied by his best friend, pit bull "Bullet." Danny liked working out, running, lifting weights and boxing. His favorite sport was soccer, having played since early childhood. He played on several teams in the Hollister Adult Soccer League for many years. One of his proudest moments, was last year when his team, Los Pericos won a trophy for 2nd place.
Danny was a diehard Miami Dolphins fan. He had planned to attend the upcoming Dolphins vs. Raider game with his little brother Juan.
Some of Danny's favorite times were spent with family, including BBQ'S, bonfires, watching professional boxing, football and most recently watching the World Cup.

Danny will always be remembered for his beautiful smile, kind heart and love for his family.
May he rest in peace, today and forever. He may be gone but he will never, ever be forgotten. He will always be in our heart and our cherished memories.

To send flowers to the family in memory of Daniel Cadenas, please visit our flower store.