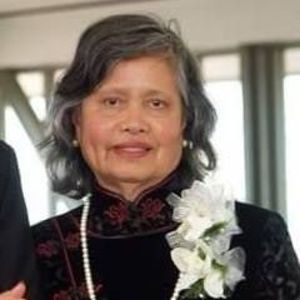 Delfina Rivera Ancheta, a Watsonville resident for nearly 60 years, passed away peacefully on February 19, 2017, at Valley Convalescent Hospital. She was 91.
Delfina was born in Bangui, Ilocos Norte, Philippines on December 15, 1925, to Juan and Leonora Rivera. She was the eldest of ten children and left her rural home for Manila to help support the family. She was a war bride. In 1948, on vacation from her job as a nanny, she met Julio Ancheta, a US Navy serviceman from America who had served in the Pacific and was stationed in Nagoya, Japan following the war. They were married, and two weeks later, at the age of 22, she left by ship to San Francisco (a 15-day journey), never to see her mother again.
She and her husband first settled in Salinas, where she became a labor camp cook, and then moved to Mountain View, where Julio worked as a construction laborer, before the family finally moved to Watsonville. Delfina was mostly a home maker, but she also was a cannery worker. She attended night classes to improve her English skills and was a proud voter when she became a U.S. citizen.
Delfina was an avid reader and storyteller, encouraging her children to repeat family jokes to make for a successful delivery. She always welcomed friends and family to her home with a warm meal. Although many will remember her for her Filipino biko, her family has warm memories of their mother canning bottles of summer tomatoes and making the best Santa Rosa plum jelly with her friend Virginia Sulay.
While she enjoyed going to San Francisco Giants games, Delfina's biggest joy was being a faithful fan of Tiger Woods. She always looked forward to attending the AT&T Pebble Beach Pro Am and walking the fairway.
After the death of her husband in 1987, Delfina began traveling with friends to Europe, Hawaii, the Philippines, various places on the mainland, the Caribbean and visiting the Holy Land. One of her greatest thrills was riding a camel.
She was a member of the Legionarios del Trabajo, a former member of the Watsonville Filipino Community, the Visayan Trust, and the Filipino Women's Club.
She is survived by her four children: James Ancheta of Florence, Arizona; Shirley Ancheta of Santa Cruz; Julio and Marc Ancheta of Watsonville; her grandsons Miles Tagami of San Francisco and Travis Tagami of Santa Clara. Her surviving siblings are the following: her brother Bernard of Hawaii, Val and Blas of Los Angeles and her sister Emmy, also of Los Angeles, as well as numerous nieces and nephews.
She was preceded in death by her parents, her beloved husband, Julio Ancheta, Sr; her daughter, Cynthia; her son-in-law Jeff Tagami, and her siblings Silvestre, Ricardo, Andres, Tula and Emilia.
The Ancheta family wishes to thank the loving staff at Valley Convalescent Hospital for their wonderful care.

Visitation services will be held on Monday, March 6, 2017 from 5-9 PM with a recitation of the Rosary at 7 PM at Ave Maria Memorial Chapel. Mass will be celebrated on Tuesday, March 7, 2017 at 10 AM at Valley Catholic Church with burial to follow at Pajaro Valley Memorial Park.

To send flowers to the family in memory of Delfina Ancheta, please visit our flower store.