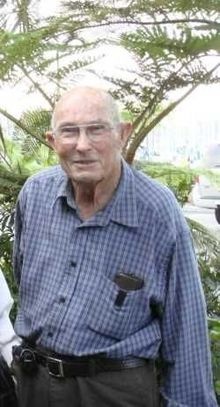 Don was born in Long Beach, CA on August 24, 1927 to William and Georgia Beeson. Five years later his sister Joan joined the family. He lived in Lost Hills, CA and graduated from Lost Hills Elementary in 1941. He attended Wasco High School and then Taft High where he met his future wife, Evelyn. After graduation from Taft High he spent some 20 months in the Army and was discharged as a corporal. Returning to school at Taft College, he and Evelyn married. After graduation, he and Evelyn moved to San Jose where Don majored in industrial arts education. In 1951 they moved to Watsonville where Don taught woodworking and math at E.A. Hall School. Don served as president of the Pajaro Valley Education Association for two terms. In 1991 he began teaching adult education woodworking. He taught woodworking, drafting and math at E.A. Hall for 37 years and adult education for 38 years. He received the Santa Cruz County Teacher of the Year award in 1984. He had many hobbies including woodworking, wood carving, oil painting and ceramics.
He is survived by his wife of 70 years, Evelyn, his two children, Jill and Dale, and two grandchildren, Heather and Jason.
Visitation on Sunday, February 25th at Ave Maria Memorial Chapel, 2:00 - 4:00 p.m. Funeral service on Monday, February 26th, at Pajaro Valley Memorial Park, 11:00 a.m.

To send flowers to the family in memory of Donald Beeson, please visit our flower store.