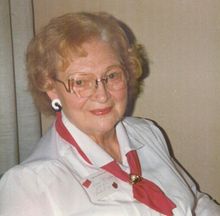 Doris A. Richardson passed away in Paradise, CA on March 17, 2014 at the age of 92. She was born on July 28, 1921, in West Plains, MO in the Richardson log cabin in the same bed where her father and grandfather were born. She was the only child of William Richardson and Etta A. (Keener) Richardson. Before Doris was 3 years old, she, along with her parents and her mother's siblings, moved West and settled on farms in the Medford, OR area. At age 12, Doris' parents divorced and she and her mother moved to Klamath Falls, OR. Doris grew up with a love of horses and at the age of 16 she became queen of the Klamath Rodeo. Within a year, she eloped and married Russell "Ed" McElroy and she gave birth to her sons Kenneth and Robert. After WWII broke out, Doris and her sons moved to Oakland, CA, where she worked as a welder in the Richmond Shipyards. After becoming a single parent, Doris returned to Klamath Falls. Once the boys were in school, she went to work for Northern Pacific Railroad. She married Henry Murphy in 1950 and gave birth to her son, Donald. In 1954, the family moved to Aptos, CA. Doris and Hank transferred to SP in Watsonville. Doris was a valued and respected employee of the railroad for 31 years, becoming the office manager for the Roadmaster. Doris adored her three boys and their families. She was an officer in The Golden Rail Club, a booster for the Watsonville Band, a member of the Watsonville Lion's Club, and was active in the Watsonville Women's Club. She was a Past Matron of The Order of the Eastern Star. She enjoyed singing in the Aptos Methodist Church Choir and later in the Watsonville Presbyterian Church Choir. She loved to travel, enjoying three trips to Europe, a variety of cruises and numerous trips across the USA. Doris didn't know a stranger. She was dearly loved by many friends and had a devoted family. She will be dearly missed. She was preceded in death by her husband, Hank, and her daughter-in-law, Barbara Murphy. Doris is survived by her sons, Kenneth McElroy (Diane), Robert McElroy (Peg), and Donald Murphy; three grandsons Kenneth S. McElroy, Kirk McElroy (Carly) and Aaron Murphy; and one great-granddaughter, Kayla McElroy.
Funeral services will be Friday, March 28, 2014 at 2:30 PM at Pajaro Valley Memorial Park, 127 Hecker Pass Road, Watsonville. A Memorial service will be held Saturday, March 29, 2014 at 11:00 AM at the Presbyterian Church, 112 East Beach Street, Watsonvillea�"Parking in the back of the church.

To send flowers to the family in memory of Doris Murphy, please visit our flower store.