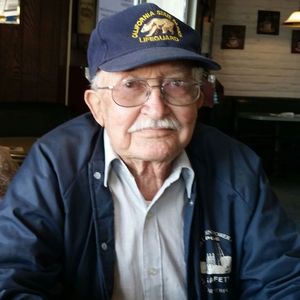 Earl Layne, a resident of Watsonville, passed away on June 29, 2016. Earl was born May 14, 1929 to Curtis and Verna Layne. He grew up in Watsonville attending local schools and joined the Navy in 1948. Earl worked for PG&E for 35 years and developed many great friendships with his fellow employees. From his early years, Earl had a fascination with cars; working on them and collecting various parts for them. He was literally a genius when it came to fixing cars as well as almost anything else. He was extremely quick witted and had a great sense of humor. Everyone who met him enjoyed being in his company. Many weekends you could find him at Don's house hanging out with the guys and working on cars. Earl is preceded in death by his father; Curtis Layne, his mother, Verna Layne Smith and his daughter Sandra Campbell. He is survived by his brother Roger Layne, his daughters Lisa, Lori (Chris) and Julie (Vic), and Don (Nancy), who became the son he never had.
Graveside Services will be held under the direction of Ave Maria will take place at Pajaro Valley Memorial Park on July 27 at 1:00pm.

To send flowers to the family in memory of Earl Layne, please visit our flower store.