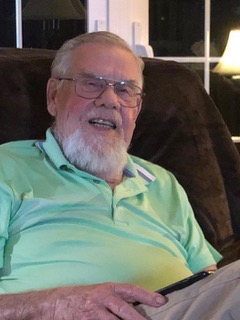 Edward “Pat” Lewis was born in New York City in 1936 to Mary and Eddie Lewis. In 1949 he moved west to Lockeford California to live with his sister and brother-in-law Jean and Marty Lock. With guidance and mentoring from his bother in-law Marty Locke, Pat built his own Harvesting business. He worked on farms all across the Central Valley from the San Joaquin Delta all the way to King City. Marty was alongside Pat in those early years sharing advice and comradery.

In 1956 Pat joined the Army and was stationed in Tacoma WA. After the army, Pat returned to California., He met Alice while he was working at a gas station in Lake Tahoe and Alice was working at the diner across the street.

The couple had three children (Tim, Jeanette and Michael) and have been married for 62 years!. In 1969 Pat and Alice move the family to Watsonville where Pat purchase D&D Ornamental Iron Works which he owned and operated for 40 Years.

Pat loved to play golf with his friends at Pajaro Valley Golf Club and Spring Hills. He was a member of the SIR’s & Elk Lodge and the Hub Club of Watsonville. He and Alice had many enjoyable trips in their motor home, once traveling through 35 states in one Trip!

Pat had a fantastic life! Socializing with friends on the links at St Andrews Scotland, or Salmon fishing in Monterey Bay on his boat the “Iron Man”; laughing with Friends, telling stories. Able to fix anything, “Pat was a great one to have on the boat, at the house or in the truck”.

So Pat, may the wind be in your sails and the moon light your way.

You will be missed.