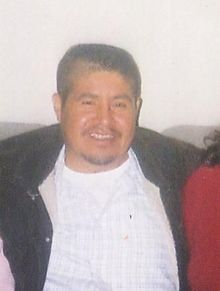 Eliseo "Cheo" Bonilla died on Sunday March 16, 2014 after a battle with Cirrhosis. He was 47.
Cheo was born in Zapotiltic, Jalisco, Mexico on June 14, 1966.
He enjoyed family gatherings and socializing with family and friends. Eliseo loved joking around with his nieces and nephews. Cheo was also a huge fan of soccer. Eliseo "Cheo" will be missed by all that knew him and especially his family and friends that were close to him.
He was preceded in death by his brother Victor Bonilla. He is survived by his three children Josefina Bonilla-MagaA�a(21), Luis Julian Bonilla(13), Ruth Isabel Bonilla(11), his parents Vicenta and Delfino Bonilla and his eight brothers and two sisters.
Visitation services will be on Monday, March 31, 2014 from 5:00 PM- 9:00 PM with a citation of the Rosary at 7:00 PM at Ave Maria Memorial Chapel, 609 Main St., Watsonville. Mass will be celebrated Tuesday, April 1, 2014 at 10:00 AM at Saint Patricks Church, 721 Main St. Watsonville.

To send flowers to the family in memory of Eliseo Bonilla, please visit our flower store.