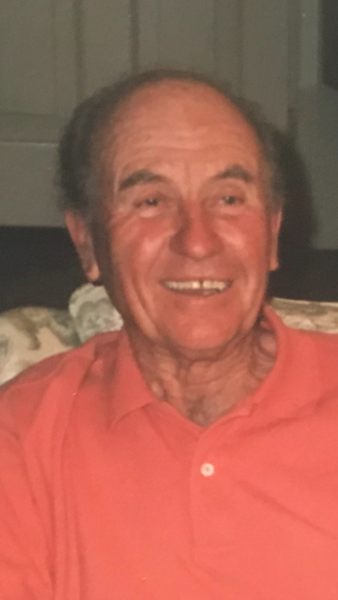 Ernest J. “Ernie” Bontadelli, a longtime farmer and resident of La Selva Beach, died peacefully at home with family near on Friday, June 22, 2018 after a full life at the age of 92.

Ernest was born in Watsonville hospital and lived most of his life in La Selva Beach.  Born in 1925, he was the eldest of three children of Earnest and Mamie (Nunes) Bontadelli. He attended the local grammar school in La Selva and was a graduate of Watsonville High School.  Upon leaving high school, he served for 33 months as a pilot in the Army Air Corp, where he flew in a B-17 during WWII.

After the war, Ernie earned a double major at San Jose State where he was a member of Delta Upsilon (DU) and earned a degree with distinction in Economics in 1950.  Following graduation Ernie joined his father and brother Charles, in building and growing the family’s farming business.  They raised vegetables and strawberries in the La Selva Beach area eventually specializing in Brussels sprouts production.  Ernie’s son Steve later joined the business and father and son worked together for over 30 years.  Even at the age of 91, Ernie could still be found on a tractor at the farm or out in the field weeding in his blue coveralls with his trusty shovel.

He was involved in all aspects of the farming industry, serving on both the Brussels Sprouts and Strawberry Advisory Boards, as well as the Santa Cruz County Agricultural Policy Advisory Commission, and the Western Growers Association. In 1984, Ernie was named Farmer of the Year by the Santa Cruz County Farm Bureau for his significant accomplishments.

Over the years, Ernie has contributed without hesitation to the needs of his community, including being a member of the PVUSD School Board and serving as president for one term and was a member of the local Elks in Watsonville, earning the great respect and sincere friendship of all who have had the pleasure associating with him. Ernie enjoyed working on his roses and gardening at home and working out with his personal trainer, Michael.  He had a great love of snow, often skiing with his buddies in Tahoe. He especially liked the idea of FREE skiing once turning 70 and was on the slopes until he turned 85.

Ernie is survived by his brother Charles Bontadelli (Marybeth); daughters Suzan Olson and Sally (Stan) Pfister; son Steven Bontadelli (Meg); grandchildren Kevin (Tara) and Lisa Pfister and Drew (Marci) and Jenna Bontadelli; great grandchildren Alexis, Elsie and Olivia Pfister. He was preceded in death by his wife of nearly 68 years, Beverley and sister, Gladys Cosand. He will be missed by all who knew him.

A celebration of life will be held later in the summer.  For more information please contact Steve at 831-818-4949

To send flowers to the family in memory of Ernest Bontadelli, please visit our flower store.