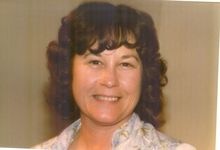 Estelle Larkin passed away peacefully in the presence of her loving family on August 28 after a 10 year battle with breast cancer.

Estelle was born in San Jose, CA, to William (Bill) and Cynthia Fiscus and grew up in Morgan Hill, CA. She attended Live Oak High School in Morgan Hill where she was a cheerleader and graduated in 1957. She was a member of and officer in the Morgan Hill Assembly #171, Order of the Rainbow for Girls. She attended Hartenel l College in 1958, where she met the love of her life, Mike Larkin.

Estelle and Mike married on November 29, 1959 and shared just shy of 56 wonderful years of marriage together. Estelle and Mike first lived in Salinas, CA in 1959 and finally settled in Watsonville, CA in 1961.

Estelle worked as a bookkeeper for several businesses over the past 45 years and for the last 20 years Uyematsu Inc. She was a loyal Pittsburg Steeler, SF 49er and SF Giants fan. She was an avid sports fan and loved attending her children and grandchildren's sporting events. Estelle was a longtime supporter of many youth sports programs such as the Salsipuedes Little League, Watsonville Pony and Colt Leagues, and Watsonville Pop Warner Football programs. She could often be found working the snack bars and was a longtime member and supporter of the Watsonville High School Booster Club and helped raise the funds to have new lights installed on the playing fields. In addition to sports, she was a classic car show enthusiast and she, along with Mike, would often attend and participate in local and interstate car shows. She was also an active leader for the Green Valley 4H Club with her children and was a supporter of the Santa Cruz County Fair auctions. She had a love for reading, gardening and crocheting and most importantly spending time with her family.

Estelle is preceded in death by her parents, brother Jerry Fiscus, and her son Michael Shaun Larkin. She is survived by her husband Mike, daughter Cindy Gunderson (Rich) and son Ian Larkin (Lisa). She is also survived by her grandchildren, Nicholas and Justin Greene, Ashley and Morgan Larkin, and numerous nieces, nephews and cousins.

The family wants to give a very special thank you to Estelle's niece/goddaughter, Mary Larkin, for her heartfelt care and dedication. Also thanks to Hospice of Santa Cruz County and all the caregivers from Florence Kuo Home Care for providing Estelle with compassionate care during her illness.
A rosary service will be held on Thursday, September 11, 2014 at 7:00pm at Ave Maria Memorial Chapel, 609 Main St. Watsonville CA, 95076. A funeral mass will be celebrated on Friday, September 12, 2014 at 10:00am at Our Lady Help of Christians (Valley Church), 2401 E. Lake Ave, Watsonville, CA 95076.

The family requests in lieu of flowers that donations be made to Hospice of Santa Cruz County, 940 Disc Drive, Scotts Valley, CA 95066, or to a cancer research organization of your choice.

To send flowers to the family in memory of Estelle Larkin, please visit our flower store.