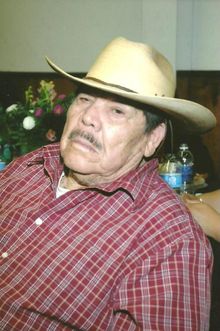 Flavio Perez (90) of Watsonville passed away peacefully on February 15, 2014 surrounded by his family. Mr. Perez, known by many as "Don Cabo," was born May 7th, 1923 in ArarA�, MichoacA�n on a Monday. Don Cabo's introduction to the United States was through the Bracero Program. After immigrating to the United States with his family in 1970, he worked as laborer in the local agriculture industry for over 25 years. Don Cabo was well known by many out on the soccer fields, as a young boy playing, and in his later years coaching many locals including his children, grandchildren, and great-grandchildren. When Don Cabo was not out on the soccer field, he could be found in the kitchen making his famous homemade flour tortillas that were readily available to family and friends. He also enjoyed planting a variety of different crops, that included various types of peppers, corn, tomatoes, which he so kindly distributed to his family and friends. Don Cabo was a great and earnest family man. He raised his family with strong values, and a culture that will be the legacy to all of his loved ones as they continue with family fiestas that will include music, singing, dancing, feasts of delicious food, good humor and a heart full of love and joyful memories.

Don Cabo was an amazing man of great character, who leaves us with an enormous void in our hearts, but leaves his contagious smile, laughter, and sense of humor within each one of us. He is survived by his loving wife of 72 years, Esther Perez; his sister Lola Monroy; children Francisco, Raul, Guadalupe, Lucina, Lorena, Flavio II, and Rosa; 36 grandchildren, 67 great grandchildren, and 1great, great, grandchild, all of Watsonville. He was preceded in death by his daughter, Luisa Guerrero; son, Sylvester Perez; brothers Jose Silva and Cresensio Perez.

Truly a remarkable man that will for ever be remembered and honored daily by his family and friends. Gone but never forgotten. His love, kindness, generosity, his smile, his laughter, his will and his memory will for ever echo through time and in the hearts and lives of his family.

Viewing for friends is on Tuesday, Feb. 25 from 3:00 PM until 5:00 PM at Ave Maria Memorial Chapel, 609 Main St., Watsonville.
Rosary with music and viewing will be on Tuesday, Feb. 25 beginning at 7:00 PM at Assumption Church, 100 Salinas Rd., Pajaro All services at Assumption will conclude at 9:00 PM.
Mass of Christian Burial will be Wednesday, Feb. 26 at 10 AM at Valley Help of Christians Catholic Community, 2401 East Lake, Watsonville
Interment will follow the mass at Valley Public Cemetery.

To send flowers to the family in memory of Flavio Perez, please visit our flower store.