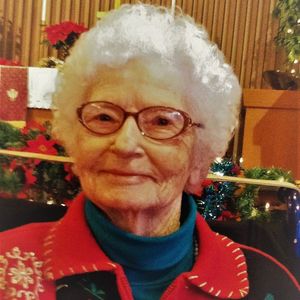 Flossie Witt Mitchell, born February 15, 1920 died peacefully December 14, 2016 in Watsonville, California surrounded by family and friends. Flossie lived in Ridgeville, Indiana for over 85 years. Flossie was born in Kentucky to Fred and Kate Witt. She moved to Ridgeville in 1929, and was the first of her family to graduate from Ridgeville High School. She married Harold Mitchell Christmas eve, 1939. They were married 58 years, Harold died in 1997. In 2013, Flossie moved to Santa Cruz County, California to be near her son, Dean, daughter, Sheila and her fiancAC., Charles. She had many close friends from her numerous visits to California.
Flossie was a member of Calvary United Methodist Church and active in various organizations: Gamma Nu Alpha Epsilon Sorority, American Legion Auxiliary Post 507, Winchester Moose Chapter 1618, and other social clubs. She was a beloved mother, wife and friend. She was an avid basketball fan, loved playing cards, loved children and being around people of all ages.
Flossie was known and loved for her generous spirit. Her open-hearted joyfulness and devotion to her friends, family and community (serving various church projects, visiting nursing homes, hospitals and people who were homebound) brought her much joy. She loved to bake and share her culinary gifts with everyone. There was always room for one more person at her table. She enjoyed crocheting, making crafts, decorating and loved spending time in her garden. She loved people and would often say, "I've never met a stranger!" She had many opportunities to befriend strangers when she and Harold travelled extensively throughout the United States after his retirement. They spent a few winters in Hawaii and most winters on the Central Coast of California (Monterey Bay) to be near their grown children.
She is preceded in death by her husband, Harold, her parents, 6 siblings and numerous family members and friends. She is survived by her son, Dean, daughter Sheila, Charles, many nieces, nephews and numerous friends. She always said she had a blessed life. She was the blessing! A celebration of life will be scheduled at a later date.