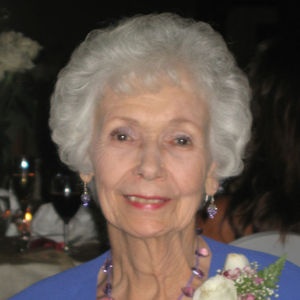 Dearly loved Frances Marie Davis peacefully passed away on Monday, January 2, 2017. Formerly Frances Marie Lopes, she was born May 22, 1926 in Gilroy, California, the only child to Pete and Lucille Lopes. Her family moved to Watsonville when she was very young. She graduated from Watsonville High School in 1944 and married Gordon H. "Bud" Davis on June 24, 1945. She was a loving mother to her four children: Tom Davis, Kathy Labrucherie, Peggy Ann Stearns and Mark Davis. Frances worked for Pacific Bell Telephone Company in Watsonville before retiring in 1978.

She was preceded in death by her husband Gordon "Bud" Davis and her son Tom Davis. She was a loving grandmother to six grandchildren, and seven great grandchildren with twins due 1/19/17. She was very kind and had many dear friends. She was a devout Catholic.

A visitation service will be held on Wednesday, January 11, 2017 at 5PM with a recitation of the Rosary at 7Pm at Ave Maria Memorial Chapel. Mass will be celebrated on Thursday, January 12, 2017 at Valley Catholic Church at 10 AM with a burial to follow at Watsonville Catholic Cemetery.

To send flowers to the family in memory of Frances Davis, please visit our flower store.