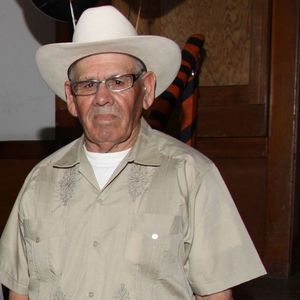 Francisco V. LeA�n passed away on March 21, 2016, in his home, surrounded by his family.
Born April 2, 1927 in Rancho Nuevo, Michoacan, Mexico to Raymundo LeA�n and Enedina Vigil, Francisco lived in Mexico City for four years prior to coming to the United States as part of the Bracero Program. He became a permanent resident in 1962, his wife joined him in 1968, and later his children in 1970, making Watsonville their home.
He worked in agriculture for over 40 years before retiring. He spent his retirement caring for his grandchildren alongside his wife, where they taught them about hard work, honesty, respect, family, and faith.
He enjoyed playing dominoes with his children and grandkids, word search puzzles, carpentry, restoring old wood furniture, and caring for his animals.
He has joined his wife of 65 years in eternal life and is survived by his five children Sabina (Ignacio) Aguilera, Jose (Elena), Ventura (Alicia), Rafael (Guadalupe), Miguel (Ruth), all of Watsonville. 16 grandchildren and 16 great-grandchildren.
Visitation will be Tuesday, March 29, 2016 at Ave Maria Memorial Chapel, 609 Main Street, Watsonville from 5PM to 9PM. Rosary will be at 7PM. Mass of Christian burial will be at 10 AM on Wednesday, March 30, 2016 at Parroquia Maria Auxiliadora 2401 E. Lake Avenue, Watsonville, graveside service will follow at 11AM at Valley Public Cemetery.
Arrangements have been entrusted in the care of The Carroll Family of Ave Maria Memorial Chapel, www.avemariamemorialchapel.com