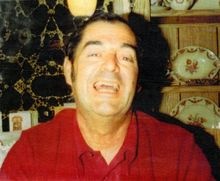 On Thursday, May 7th, 2015 a longtime resident of Watsonville, CA, Frank Henry Rosa peacefully passed away.
Frank was a man of many wonderful traits. He loved to hunt, golf and BBQ with family and friends. He cherished spending time with his family, who meant the world to him. Frank was apart the American Legion and the California Water Fowl. He also served in the US army from 1950 and was Honorable Discharged in 1953.
Frank was preceded in death by his parents; Joe and Mary Rosa and grandson Jeremy Rosa.
He was survived by his children; Carol Wesolowski of Gardnerville, NV, Mark Rosa of Dayton, NV, Laurie Parker of Murphy, CA. Frank is also lovingly remembered by his brother Joe Rosa of Watsonville and his 6 grandchildren and 1 great grandchild.
A Celebration of Life service will be held on Friday, May 15, 2015 at 1 PM AT Padres Hall, 35 Browns Valley RD in Corralitos, CA.

To send flowers to the family in memory of Frank Rosa, please visit our flower store.