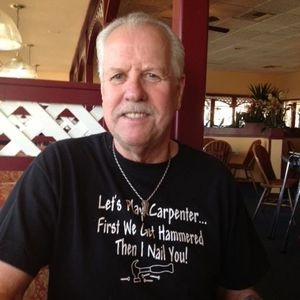 Gary Lester Liebenberg died peacefully in his home in Hollister on January 14, 2017 after a long illness. He was 72.
Gary was born on November 11, 1944 in Santa Cruz to his parents, Lester and Margaret Liebenberg. He graduated from the San Lorenzo Valley High School in 1963. Soon after, he joined the army with his twin brother, Arthur, where they served as Military Police. Both Gary and Art were great marksmen; they both were awarded first and second place at the 1965 U.S. Army Corp Rifle Pistol matches. When one would take first place the other was in second. Gary enjoyed golf and duck hunting. He was a member of the Ghost Mountain Riders Motorcycle Club from 1989-1998.
Gary retired in 2009 after serving 40 years for the Carpenters Union.
Gary is survived by his wife, Marian Sanchez Liebenberg; daughter, Yvette Burton (Curtis); son, Jeff Liebenberg (Mindy) of Scotts Valley; brothers Richard, Steve and Howard Liebenberg, and a sister, Donna Serr. Gary was preceded in death by his parents, and his twin brother, Art at age 21.
He leaves six beautiful granddaughters, and one great-granddaughter and many nieces and nephews. Gary lived life to the fullest; he is very much loved by his family and many friends.
A celebration of Gary's life will be held on Sunday, January 29 at The Wooden Nickel, 1819 Freedom Blvd., Freedom from 4 to 7 p.m. No black attire or sad faces. We ask that you share your laughter with memories and stories.

To send flowers to the family in memory of Gary Liebenberg, please visit our flower store.