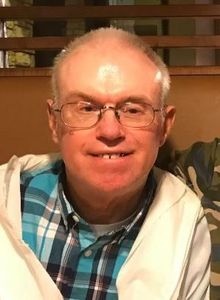 Gerard (Jerry) Mabie died on Tuesday, Feb. 6, 2018 at San Jose Regional Center after a tragic accident. He was 71.
He was born on May, 18, 1946 in San Francisco to Eldon and Eleanor (Gustafson) Mabie. He spent his growing up years in Watsonville, where he enjoyed family outings, tinkering with gadgets and later electronics, camping and other activities. He spent his adult years in San Jose, living in group homes and working at Goodwill and most recently, Hope Workshops. He loved life, had a great smile and sense of humor. He enjoyed movies, burgers/fries, going to the mall with his friends, tinkering in Ken and Julie's garage on his many electronic projects, going on trips to Washington to see Julie and Earl, and on trips with other adults with developmental disabilities.
He is survived by his brother, Kenneth (Julie) Mabie of Aptos; Julie (Mabie) (Earl) Marcellus of Leavenworth, Wash.; as well as a niece and nephew, their spouses and children. He was preceded in death by his parents.
Mr. Mabie, in his tragic death, was able to be an organ donor. In lieu of flowers, the family asks that you consider organ donation. There will be a family/Group Home/and coworker Memorial Service at a later date.

To send flowers to the family in memory of Gerard Mabie, please visit our flower store.