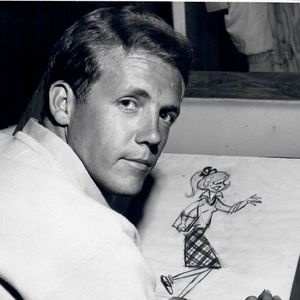 Gordon Leroy Holley, better known as Lee Holley passed away suddenly on Monday March 26th, 2018 at the age of 85.
Lee Holley was born in Phoenix, Arizona, on April 20, 1932. Lee was a graduate of Watsonville High School, and following high school, he joined the Navy in 1951. He served as an Aviation Ordinanceman on the USS Bairoko during the Korean War until 1955.
Lee aspired to be a cartoonist, and displayed a love of cartooning at an early age. So upon leaving the Navy, Lee studied at Chouinard Art Institute in Los Angeles.
In 1955 Lee began his professional career as a Warner Bros animator in the Friz Freleng unit and was there from 1955 - 1958. Lee worked on Bugs Bunny, Road Runner, Porky Pig, Speedy Gonzales, Sylvester and Tweety, and Daffy Duck characters. In 1958 he started working for Hank Ketcham on Dennis the Menace.
While working for Hank Ketchum, Lee submitted cartoon ideas to the newspaper syndicates, and in 1960 he finally succeeded in selling a teenage panel to King Features called Ponytail.
Ponytail debuted in 1960 was syndicated in over 300 newspapers worldwide until 1989.
In addition to his career, and love of drawing, Lee had a passion for flying. He loved to fly his own plane, and enjoyed flying over the Monterey Bay. One of his favorite experiences was renting a plane in New Zealand and flying from the North Island to South Island.
Lee was also an avid runner. He ran over 50 marathons, including 10 Boston Marathons. In addition to running, Lee loved playing tennis, and would spend hours on the courts whether at Seascape or the Palm Springs Tennis Club. Lee also enjoyed travelling, and was ardent reader, especially anything pertaining to WWII history.
Lee truly enjoyed life, and enjoyed making others happy. He took great pleasure in doing sketches for anyone who asked, whether it was for single person or for a class full of children.
He was preceded in death by his parents; Gordon and Vida Holley.
Lee is survived by his wife, Patricia Holley and children; Karen Holley and Susan Carothers. He is also survived by his siblings Donna Roberts and Donald Holley and his grandchildren; Chance Carothers, Suzanne Cassady and his great grandchild, Marco Parra.
Services will be held on April 20th, at Ave Maria Memorial Chapel at 10:30 with a Celebration of Life to follow at The Seacliff Inn, In Aptos.
A Celebration of Life in Palm Springs to be announced at a later date.
In lieu of flowers, please consider donating to Veterans, Alzheimer's Association, or Charity of your choice.

To send flowers to the family in memory of Gordon Holley, please visit our flower store.