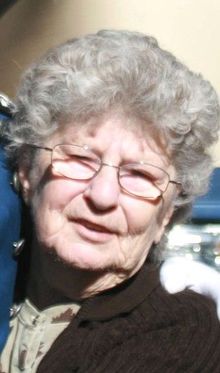 Grace was born March 27, 1929 on Broadis Street to John & Dina Crosetti and was a lifelong resident of Watsonville, CA. In 1952 she met and married her husband Donald Chapin Sr.

Grace is survived by her Son & Daughter in law, Donald Chapin Jr. and Barbara, her Daughters and Son in laws, Marilyn and Jim Valentine, Janet and Vernon Snodderly, Carol and Ernest Howard and Daughter Sharon Chapin.

Grace also leaves her sisters Nora Dietz and Marie Ray, as well as a brother in law, Richard Chapin.

Aside from being a homemaker, Grace worked many years for the Register Pajaronian in the circulation department. Grace loved, loved, loved playing Bingo and looked forward to each Grandchild turning of age so she could shuttle them off to play Bingo for their birthday. Grace was an incredible cook and baker. She loved nothing more than getting her entire family together for some of her famous dishes and great homemade pies or cobblers.

Grace was preceded in death by her husband Donald Chapin Sr. and her grandson Jeremy Rosa.

Services will be held at Ave Maria Memorial Chapel on Wednesday, October 11, 2017 at 10:00 a.m. with burial following at Watsonville Catholic Cemetery.

To send flowers to the family in memory of Grace Chapin, please visit our flower store.