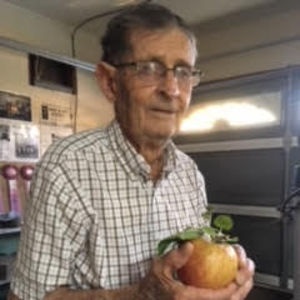 Herbert W. Chadwell passed peacefully into glory on February 27, 2018 at the age of 91.
He was preceded in death by his parents Dayton and Clara, sister Virginia, and brother Richard. He leaves his wife of 66 years, Gloria; daughters Karen (Wayne) Moses, Marilyn (Pat) Edwards, Joan (Fred) Wilkinson, Patty (Todd) Spellman and Janice Tibbs.
He also leaves 12 grandchildren: Wendy (Moses) Zermeno, Steven Moses, Allison (Edwards) Solano, Kari (Edwards) Ardis, Kayla Edwards, Matt Wilkinson, Adam Wilkinson, Jacob Wilkinson, Emily Wilkinson, Amanda (Spellman) Fortino, Laura Spellman, and Greg Spellman. He also leaves 9 great-grandchildren: Malakai Zermeno, Alexia Zermeno, Mathew Moses, Alex Solano, Isabella Solano, Daniel Solano, Jane Ardis, Chase Wilkinson and Aria Wilkinson, with 3 more great-grandchildren on the way. He leaves his sister Lois Kellogg and many nieces and nephews.
He was a long-time apple grower near Aromas, and served in the United States Navy as a Fireman, First Class on the USS Minneapolis. Following his service in the U.S. Navy, he attended California Polytechnic University at San Luis Obispo, earning a degree in Animal Husbandry. He then worked for George Mee at the Peach Tree Ranch, south of King City, before returning home. There, he farmed his father's orchard in Chittenden, near Aromas, California. He also worked for the State of California, Employment Development Department. He retired from farming in 2010, settling in Watsonville for the remainder of his life. He will always be remembered for his signature farewell, "See you round like a donut!"
Graveside services will be held at Garden of Memories cemetery in Salinas for friends and family on Saturday, March 10th, 2018 at 2:00 pm.
We want to recognize and thank the following for their friendship and support: Maura Contreras, Rigo Navarro, Hospice of Santa Cruz County, and Care from the Heart. Memorial donations may be contributed to the donor's preferred charity.

To send flowers to the family in memory of Herbert Chadwell, please visit our flower store.