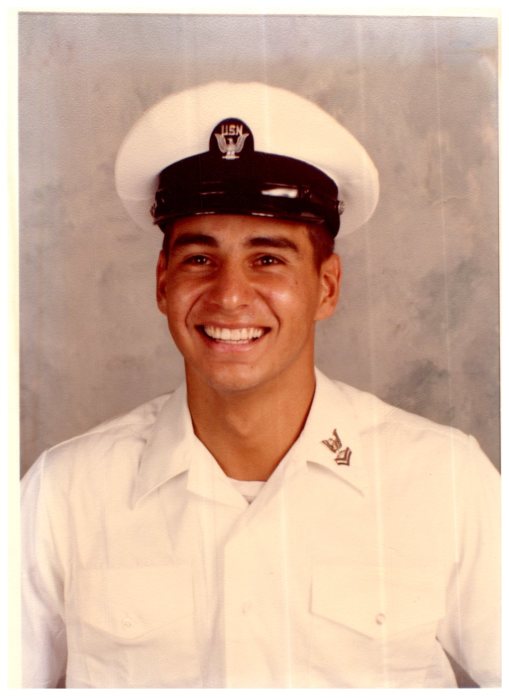 James Ronald Robert Amick, 57 of Trumann, Arkansas passed away Sunday, June 24, 2018 at the Flo and Phil Jones Hospice House in Jonesboro, Arkansas. He was born September 8, 1960 in Santa Cruz, California to John M. and Dolores M. (Fuentes) Amick, and was a longtime resident of Watsonville before his move to Arkansas. He served in the United States Navy aboard the USS WM. H. STANDLEY CG-32, and, as an Operation Specialist, participated in ‘Operation Eagle Claw’ with the Carrier Group Nimitz in the Persian Gulf during the 1980-81 Iran Hostage Crisis. He loved sports and was quite an athlete in baseball and football. He enjoyed the outdoors and hunting and fishing. He was an avid reader, especially of Louie L’Amour and Westerns, military history, and the Scriptures. He loved life, family and friends, and was lovingly referred to as “Pa Pa’’ by his grandchildren. He was especially appreciative of his wife Mary’s loving care and support, and the enduring and unconditional friendships of both Kathy Holler and Jackie (Jack) Reed, and, individually, their honesty and loyalty. He was very receptive and thankful of all the visits and prayers bestowed upon him from loving family and friends. Survivors include his wife of eighteen years, Mary (Oakes) Amick of Trumann, Arkansas; mother, Dolores M. Walsh; three brothers: John Amick, Daniel (Renee) Amick, and David (Norma) Amick; two sisters: Patty Amick-McGrath (Richard), and Gina Amick, all of California; three children; four grandchildren; one great-grandchild, of Arkansas, and a great host of family and friends. He was preceded in death by his father, John M. Amick. The Family wishes to extend their heartfelt gratitude and thankfulness to all the staff at St. Bernards Hospice and the Flo and Phil Jones Hospice House (of St Bernards Healthcare), both of Jonesboro, Arkansas for their many kindnesses and loving support, and the outstanding efforts of RN’s Sherry Freeze and Brenda Wright for their extraordinary grace and steadfast care of James. A Celebration of James’ Life will be held on Sunday, August 26, 2018 at 11:00 am at the VFW Freedom Post #1716, 1960 Freedom Blvd., Freedom, CA with Pastor Christopher Tortorici officiating. Donations may be made in memory of James to St. Bernards Development Foundation (Hospice/Healthcare), 400 East Street, Jonesboro, AR 72401, Phone: (870)-336-5009 or www.StBernardsFoundation.org.