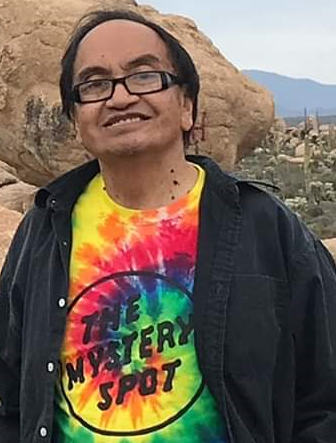 James Ancheta, resident of Florence, Arizona, died at San Jose Regional Hospital on May 18 of renal cancer. He was 67.

James was born on November 1, 1951 in Monterey County to Julio and Delfina Ancheta. He grew up in Mountain View and Watsonville. He graduated from Aptos High School in 1970, and attended Cabrillo College. He was a staff photographer for IBM in San Jose and later Kodak in upstate New York.

James was a devoted member of St. Joseph’s Church in Capitola.

James is survived by his wife Kim Powell of Arizona; two brothers Julio and Marc Ancheta; sister Shirley Ancheta, and nephews Miles and Travis Tagami; and numerous relatives in Hawaii, Los Angeles and Mountain View. He was preceded in death by his parents and his sister Cynthia.

To send flowers to the family in memory of James Ancheta, please visit our flower store.