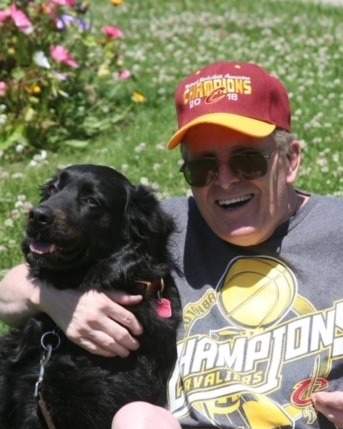 James (Jim) Franklin Dickson died at on October 19, 2022 in Watsonville, California at the age of 77. A resident of Union City, California, Jim was born in Cleveland, Ohio on January 15, 1945. He is survived by his sister, Virginia Dickson of Grottoes, Virginia, sister, Joyce Dickson Dye, and brother-in-law, Michael Dye, both of New Port Richey, Florida and his beloved service dog, Darla, who was always by his side. Jim is proceeded in death by his parents, Phyllis Dickson and James W. Dickson and his sister, Carol Dickson.

A Navy veteran, Jim volunteered to serve in the Vietnam War and was decorated with The Purple Heart, The National Defense Service Medal, The Vietnam Service Medal and The Vietnam Campaign Ribbon. Jim attended Bowling Green State University, Bowling Green, Ohio and played on the collegiate rugby team, as well as attending Brooks Institute of Photography, Santa Barbara, California. He graduated from North Olmsted High School, North Olmsted, Ohio, and played on the football and wrestling teams.

A talented photographer by trade, Jim was an avid sports fanatic having coached Burlingame High School Rugby, playing on Palo Alto Rugby Football Team, PACOS Rugby Football Team and a fan of the Cleveland Browns. His favorite childhood idol was Roy Rogers. A gravesite military funeral will be held at 1PM on Monday, November 14, 2022 at San Joaquin National Cemetery in Santa Nella, California.

Happy Trails to you, Jim, until we meet again.

To send flowers to the family in memory of James (Jim) Franklin Dickson, please visit our flower store.