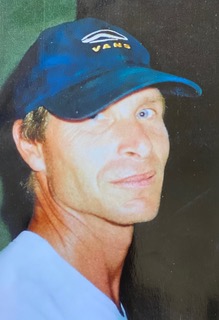 James Harry Lamb Jr. of Santa Cruz, CA, age 57, passed away on July 5, 2022, from a long-term illness. He was born on September 23, 1964 at Enloe Hospital in Chico, CA to James and Patricia Lamb.
James was a big sports enthusiast and a two-time MVP wrestling champion and captain of the Pleasant Valley High School wrestling team in Chico, CA. He also loved football and basketball. His favorite team was the Dallas Cowboys, and he loved Aaron Rogers of the Green Bay Packers. His favorite teams in the NBA were the Sacramento Kings and the San Francisco Golden State Warriors.
Following his high school graduation, James was involved in a serious snow skiing accident that nearly took his life on January 27, 1982. After thirty days of being in a coma followed by a year of hospitalization, intense treatment, and physical therapy, he was able to return home—where he slowly began to build back his life after rehabilitation.
In 1997, he was blessed with a daughter, and in 2017, he was blessed with a granddaughter.
James was able to re-enter the work field by working for his dad in landscaping. In 2005, James made a decision to move to the beautiful coast of Santa Cruz where his sister and brother-in-law live. He was happy to trade the Chico heat for an ocean breeze.
At a young age, James gave his life to God, who would continue to be his comfort and guide. He dedicated his life to helping others and serving quietly behind the scenes. He had a heart of gold and would give anyone in need his last dime. Most never knew how he would take care of others and help them without being asked. He did not like accolades or attention but his beautiful, gentle, kind spirit and funny wit made him a human magnet. He was beloved by all who knew him.
He was eventually placed into long-term care, where he became a beloved patient by the staff and residents of Valley Convalescent Hospital in Watsonville, CA. The nurses and staff were some of the most compassionate and loving people that he grew to love (and tease) dearly.
Regardless of his challenges, his blue eyes sparkled, he smiled big, and he loved deeply. His dad was his best friend, and they talked daily throughout his life.
James was survived by his parents, Jimmy and Patti Lamb; daughter, Madison Marie; granddaughter, Alice Diana; siblings, Tami Manchester (Mark); Troy Lamb (Jeannie); Jamie Austin (Randy); nieces, Kellie and CeCe Manchester; nephews, Colby, Dylan, Austin, and Ethan Lamb. He was preceded in death by his brother, Robert Mitchell Lamb-Mason.
A small private family gathering will be held in his honor in August.
James will be missed for the rest of our lives—he left an indelible mark—forever on our hearts!

To send flowers to the family in memory of James Harry Lamb Jr, please visit our flower store.