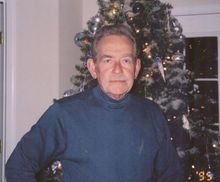 Jan "John" Krom was called home to the Lord on January 13, 2014 and is now at peace with Jesus Christ, his Lord and Savior. All who knew John understood that he was an extremely devoted husband and father who was equally proud of his children and grandchildren as he was proud of being Dutch. He is survived by his wife (Gloria), daughters (Debbie and Katie), and four favorite grandchildren (Scott, Shawn, Kelsey, and Brittany).

John was born in Rotterdam, Netherlands on June 6, 1935. A few weeks before John's fifth birthday his country was invaded and occupied by Germany for the duration of World War II. During the war he survived under the care of his mother, Petranella, and with his younger brother, Marius. John's father, Jan, was deployed with the Dutch Merchant Marines at the time of the invasion, spent the war fighting with the Allied forces, and was only able to reunite with his family in 1945 at the end of the war. Despite the horrors Jan experienced in the occupation, he grew up to be a loving and caring person who was enamored with all cultures.

As a young man his mechanical and engineering abilities were clear and he obtained a higher degree in Engineering from the University of Rotterdam. However, his energy and excitement for activities led him to join the Dutch Merchant Marines and he spent much of his time underwater in deep sea diving gear disarming bombs in the various Netherlands waterways.

In 1959, at the age of 24, Jan immigrated to the United States and established himself in Houston, Texas working an engineer and gearing up for the rest of his life. He met his wife, Gloria, while she was out on a blind date with Paul. They married on April 2, 1961 and then moved to Oakland, CA later the same year in October. His devotion to Christ was made most public at his Baptism in 1962 at the Oakland Baptist Church. His first daughter, Debbie, was born in 1963 in Oakland and the Krom family had started growing strong family roots in the Bay Area. In 1967, with the Krom family now in Fremont, these roots grew again with his second daughter, Katie.

In addition to loving his family, John loved many things in this life: boating, photography, flying, reading, animals, and gardening. One of his greatest loves was being a United States Citizen, which he accomplished in 1968. While still loving the Netherlands, and always proud of his Dutch Heritage, his love of this country was always evident.

He actively pursued many of his interests in ways that everyone enjoyed: Obtaining a pilots license and flying for many years; Owning various boats and taking the family around the Delta; and planning and building a dream home.

Throughout all the years and passions the three constants were Christ, his family, and his work. John was truly delighted by the work he did as an engineer and has been blessed to have spent the past 20 years as a Senior Manufacturing Engineer for Guzik Technical in Mtn. View. Guzik staff were considered by John as his work family and he loved working there.

John lived an amazing life. As a child he saw the horrors of war. As young man he had the excitement of Dutch Merchant Marines. As a man he loved his family, his work, and his Lord Jesus Christ. Gifts to the family would be greatly appreciated.

To send flowers to the family in memory of Jan Krom, please visit our flower store.