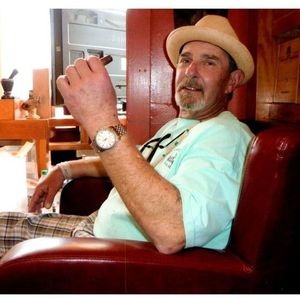 On Thursday, July 30th Jay L. Curtis, 61, passed away at Watsonville Community Hospital of liver failure.
Jay was born on June 23, 1954 in San Francisco, CA to Walter M. Curtis and Bette A. Curtis.
Jay worked at his father's Unocal 76 station in his early 20's in Watsonville. He then worked for Pajaro Valley Preventions and Community Solutions in Santa Cruz. He obtained a degree from Bethany College and became a substance Abuse Counselor for San Benito County.
Jay cared for his mother Bette Curtis for the past 12 years before her passing on July 4th, 2015. He was a devoted son.
Jay was known by his friends, family and colleagues as a "story teller" and always had something funny to say. He was a passionate artist and an avid golfer. He enjoyed riding his motorcycles, BBQing for friends and smoking cigars from his collection.
Jay was preceded in death by his both his parents and his brothers, Walter Jr. and Denton Curtis.
He is survived by his wife, Monica Medrano and children; Mattie Soria and Tiffany Curtis. Jay is also lovingly remembered by his four grandchildren, Druann, Alexia, Leniya and Rocky Jr., and many other family members and great friends.
Jay was so grateful to have so many beautiful people in his life, especially, David Garcia, Jesse Lopez, Tom & Kim Ford, Tom Silva and all his buddies from the golf course.
A Celebration of Life services will be held on Wednesday, August 5, 2015 from 4:00-9:00 PM at Ave Maria Memorial Chapel, 609 Main St. Watsonville.

To send flowers to the family in memory of Jay Curtis, please visit our flower store.