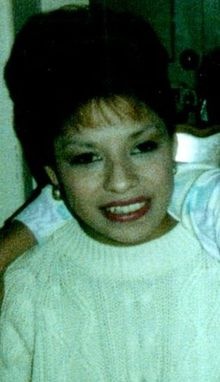 Jennie Gervasio passed away unexpectedly on September 11, 2017. She was 56.
She was a longtime resident of Watsonville born on April 28, 1961 to Juan Gervasio and Esther Galvan. She enjoyed listening to oldies, singing, dancing, and had a characteristic sense of humor that would brighten anyone's day, along with a distinguished smile and a unforgettable signature laugh. Her family referred to her as Mrs. Clean always being tidy and kept everything in order. Jennie also had a talent for drawing. She received the most joy spending time with her grandchildren.
She is survived by her loving husband Richard Martinez of 38 years and 3 children Geneve Valle, Ricky Martinez, Alex Martinez, and grandchildren Lexi Martinez and Aiyana Valle. Along with 7 siblings Julian Vasquez, Christina Vasquez, Rosie Ellis, Jessie Muok, Raul Torres, Peter Gervasio, and Lisa Soria. Along with several nieces, nephews, and friends. She was preceded in death by her brother Ernie Vasquez.
Visitation will be held on Thursday September 21st 2017 at Ave Maria Chapel from 5:00PM-9:00PM. Services will be at 7:00PM. Jennie will be laid to rest on Friday September 22nd 2017 at Valley Public Cemetery at 11:00AM in her San Francisco 49er attire due to the fact she was an avid fan of this team.

To send flowers to the family in memory of Jennie Gervasio, please visit our flower store.