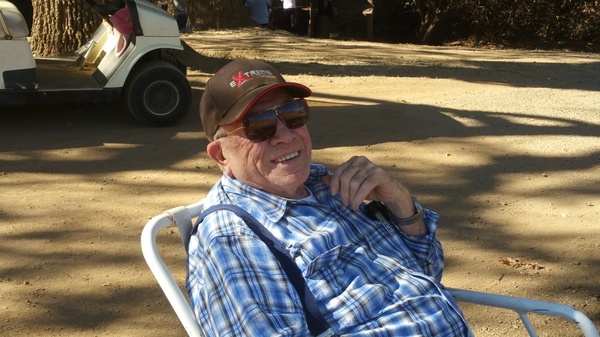 Jerome Walter "Jerry" McCabe passed away peacefully at home on November 16th.  Born on December 10, 1931 to Anna (McFadden) & Francis J. McCabe, he was a lifelong resident of Watsonville who attended local schools as well as Cal Poly in San Luis Obispo.  He enlisted in the Air Force to serve in the Korean War, and he returned to Watsonville after being stationed in Guam and at Nellis AFB in Las Vegas.  In 1960, he married Mildred Nussbaumer, and together they raised three children in the years that followed.  Jerry was a master cabinet maker who worked as a carpenter for Rosewall & Sons, and GW Davis Construction. Ultimately, he retired from S Martinelli & Company.

An accomplished shooter who hunted with family and friends since childhood, Jerry's greatest passion was for skeetshooting. In addition to shooting weekly until he could no long physically do so, he enjoyed teaching many people of all ages and backgrounds the finer points of the sport.  He was also a fan of fast cars.  As a young man, he built and raced cars for fun. In his retirement years, he renewed his love of horesepower by rebuilding the engine in his 1965 Mustang Fastback.

Jerry is survived by his wife, Mildred, and their three children, Kathy, Ruth and John, all of Watsonville; his sister,Marilyn, of Oakland, and his brother, David, also of Watsonville.

His family would like to express their most sincere gratitude and thanks to the following:  Drs Lopez, Potkin, and Surdock who gave him the best of medical care; Brian Orozco of Functional Fitness Training Center for the years of physical training he provided; Anna Ramos and Martha Castillo, of Touched By Angels, as well as everyone at Bridge Hospice, for their dignified and compassionate care; Stefany, Daniela, and the entire staff at the Watsonville Family YMCA who looked after Jerry with exceptional attention during his twice-weekly visits to the pool, and who have created a truly inclusive and close-knit community for their members of all ages.

Services will be held on Thursday, December 5th, at Our Lady Help of Christians Catholic Church (2401 E Lake Avenue).  Rosary to be recited at 10:30am with funeral mass following at 11:00am.   In lieu of flowers, the family requests that donations be made to the YMCA.

To send flowers to the family in memory of Jerome McCabe, please visit our flower store.