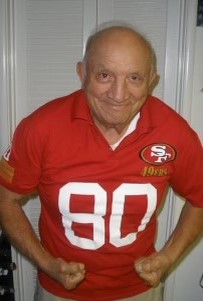 Joe Louie Garcia passed away on January 30, 2022, in Watsonville, California. Louie was born on March 20, 1930, in Mexico City, to Eduardo & Catalina Garciacano. Growing up on the Race Track in Mexico City, he traveled across the United States as a horse trainer visiting every track in the USA and Canada.  Once while working at Tanforan Race Track he bunked, shared meals, and riding ideas with Willie Shoemaker.  After a short career in Horse Racing, he migrated at the age of 19 to Watsonville.  First working at the cannery and he then worked for over 30 years as a mechanic at Portola Motors.  In 1950, One Saturday night while attending the VFW dance in Watsonville he fell in love with Belen (he stated it was love at first sight). On their third dance after that first night of dancing, he proposed to her.  She laughed at him and told him he was crazy but five years later they were married. Louie & Belen had three sons; Joe Garciacano, Steve Garcia & Rene Garcia.

After working at Portola Motors he went to work at Watsonville High School and worked at the HS for over 25 years, working till he was 82.

For most of his years, in Watsonville, he was a volunteer for the sports teams his son’s were playing on. He would help cook, help sell tickets, hold the line marker and of course be on the clean-up committee. His commitment went from Little League Baseball to High School Sports and he also spent over 30 years as a baseball umpire in Santa Cruz County area.  In between work & volunteering, Louie & Belen found time to travel, they took road trips to Seattle and also to El Paso twice. After the boys moved away they began to visit Mexico, sightseeing in almost every state of Mexico, spending time with Belen exploring was enjoyment for him.

They also took the Panama Canal Cruise and have a video to prove it.  Actually, he took a four-hour video of the water filling up the canal.  He thought it was something his sons should see, so he had a movie night and watched four hours of the Panama Canal filling up with water.

They even traveled with the Watsonville Marching Band to Europe and really enjoyed the cities of Paris and Madrid the most as they toured around Europe and North Africa. Louie was also a huge SF Giants, SF Forty-Niners and Warriors fan. Louie really enjoyed watching college sports as well, saying those kids try harder than the pros. He hardly ever missed watching a game on TV and enjoyed going to the Giants Opening Day and tailgating before the game, with his sons almost every year when the San Francisco Giants were playing at Candlestick Park.

When Belen passed away in 2002, Louie was saddened and we thought his broken heart would never mend.

Luckily for him, he met Rosa Gutiérrez and her daughter Isadora and became happy again in life. He married Rosa and adopted Isadora and enjoyed each day of his new family life. He especially enjoyed Rosa’s cooking, he once said that even her Peanut Butter & Jelly sandwiches are delicious.  Louie and Rosa spent time outdoors, walking at the beach, and especially window shopping at the mall people watching.  Along with Isadora, they would enjoy time at the State and County Fair, he was really happy when Isadora won awards at the fair for her art. Of course, Louie loved to BBQ, so almost every weekend they would BBQ carne asada or chicken.  Rosa would make the rice, beans, and salsa while Louie did the BBQing.  Playing music, eating carne asada was one of his favorite things to do on weekends.  Remember, Louie worked to the age of 82, so he only had weekends off.  He was quite the worker bee, telling us that going to work was one of his passions and of course telling his coworkers a new joke or two everyday.

Plus I’m sure a joke or story that you will cherish as a memory of Louie.

Public viewing will be held on February 12th from 3pm to 7pm at Ave Maria Memorial Chapel.

To send flowers to the family in memory of Joe Garcia, please visit our flower store.