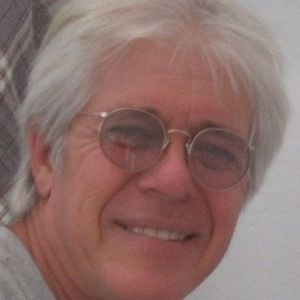 John Phillip Bergwall died suddenly and unexpectedly on January 19th 2017. John was born in Vallejo, CA. to Cecil and Phillip Bergwall. The family often visited Santa Cruz in the 1950's and 60's and John moved to Santa Cruz in the early 1970's. He obtained a business degree from Cal State Fullerton and an Art History degree from UCSC following two years at Cabrillo. His first artistic love was sculpture and he was looking forward to working in his studio on new large pieces in a medium other than clay. John served in the United States Navy during the war on Vietnam and was stationed in Japan before being transferred to Mare Island. After his discharge and his move to Santa Cruz, he applied for a job with the Santa Cruz County parks department as a maintenance worker, a career of 32 years, which kept him busy from Greyhound Rock to Pinto Lake. John loved to work with his hands and be outdoors. He formed close bonds with his co-workers and earned a reputation as a perfectionist. He wouldn't be hurried. He did the job right the first time. A "Bergwallian" evolved as the term for any fine piece of construction work or plumbing or concrete, his favorite medium. Regulars at The Hook not only appreciated his spotless restrooms (he favored bleach) but also the strains of classical music while he worked. He is remembered by his co-workers as an icon, a cornerstone to the whole foundation of parks maintenance, a natural teacher, a generous man of wisdom and poetry in motion in everything he did. Through his example he showed that different, better, more aesthetic solutions could be found for most any problem. John loved music, especially blues, jazz and rock and roll. He held guitarist Harvey Mandel in the highest esteem, believing that Mandel deserved greater recognition. Almost every day one could hear Mandel playing if John was home. Friends and family remember his generosity, his goodness and ability to calmly interact whatever the situation. John was full of life, always fun to be around, one of a kind, a great personality, a true friend and mentor. He is survived by the love of his life Gillian Greensite. They enjoyed 29 years of happiness, laughter, love and dancing. He brought her tea and toast every morning and was the calm center and complement to her persona. He is also survived by his sister, Annie Terry; nephew, Mike Terry; stepson, Phillip Greensite and first cousins. At John's request there is no service planned.

To send flowers to the family in memory of John Bergwall, please visit our flower store.