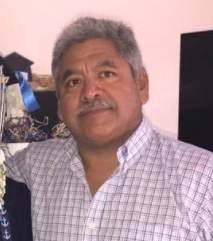 Jose was born in Ciudad Acuna, Coahuila, Mexico. He was raised in Watsonville after immigrating from Mexico. He bought his first home where he resided in Castroville for 34 years.

Jose attended various elementary schools in Watsonville, attended Pajaro Valley Middle School and transferred to EA Hall Middle School where he met the love of his life. They both attended Watsonville High School and he graduated in 1980. The same year he graduated high school he married the love of his life Maria and were married for 41 years. He became a 1st time father the same year. He then had 2 wonderful sons. While in high school he was in 2 small bands called Grupo Tentacion & Grupo Estrella. Eventually in the early 1980’s they formed the locally known band called Los Reyes. He was one of the original band members. When the band 1st formed, he played the keyboard but changed his instrument to his favorite liking which was the guitar. Los Reyes was well known in the church community of San Pablo de Colores in Pajaro. He was with the band for 22 years. They traveled as far as Eureka, San Jose and King City for various events. Their home base to play was ultimately at San Pablo de Colores. Playing in the band was the best times of his life. He rocked it on stage, met many friends and danced the night off with his wife at events they played at.

Jose enjoyed working on mechanical work in cars, welded and made various things like homemade grills, he enjoyed gardening and grew many vegetables and always shared with many family & friends of his organic garden. He loved to BBQ and cook fried foods on the weekend on his homemade grill and disco and enjoyed family gatherings in his backyard. Every football season he enjoyed watching high school football whether it be his oldest son coaching North Monterey County High School Varsity or watching his grandsons play at Aptos High School or Flag Football. He was a lifelong San Francisco 49ers fan and enjoyed watching them on Sundays win or lose. When he was not gardening, fixing cars, or watching football he would spend his time ocean fishing on his boat in Monterey or Moss Landing. When he wasn’t on the boat he would go dock fishing with his grandsons at Moss Landing or Seacliff Pier.

Jose was a family man who adored his large extended family, always the joker in the family but well respected by everyone, his passion of music always stuck with him after he left his band and still continued to play his guitar at home.

He was preceded in death by his Father, Arturo Sergio Salas.