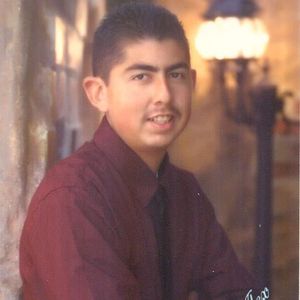 Jose Alejandro (Alex) Silva went home to heaven on June 9, 2014. He was born on September 7, 1994. He was 19 years old. Alex was a lifelong resident of Watsonville and a 2013 graduate of Pajaro Valley High School.

Alex always had a smile on his face and a willingness to help others. You could undoubtedly count on him to greet you with a warm hug and he possessed a humorous outlook that was infectious. He had numerous friends, many of whom were friends from kindergarten. Alex truly touched many lives in a positive way. His family was his pride and joy and he always made it a point to attend every family function. He was a huge fan of the San Francisco Giants and Forty Niners and would enjoy yearly tailgate parties with relatives and friends from near and far. A tradition he and his father kept for many years. He was employed by the Santa Cruz Beach Boardwalk in the Maintenance Department and was working toward his goal of becoming a Police Officer.

He will be reunited one day with his Mother, Leticia, Father, Jose Natividad, Sister, Danielle, Nephew, Adrian, Grandmothers, Josefina Munoz Navarro and Carmen Silva, Girlfriend and love of his life, Isabel Corrales, many aunts, uncles, cousins, as well as many close family friends. He is in heaven now with his Grandfather Zacarias Silva. Alex will be missed more than words can say but he will be loved and remembered forever.

To send flowers to the family in memory of Jose Silva, please visit our flower store.