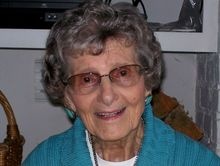 Josephine Franich Puhera, 95, Watsonville, passed away peacefully the morning of October 31, 2014 in Watsonville, California, surrounded by her family.

Jo was born in Butte, Montana to Mijo and Luce Franich on February 22, 1919. After settling in California, she graduated from Oakland Technical High School. She lived and worked in San Francisco during the 40's before settling in Watsonville. There she raised 2 boys as a widow, working as Mintie White's School Secretary. Jo was a longtime club member of Y.L.I. and S.A.C.O. of Watsonville. She enjoyed entertaining her family and friends.

The family wished to extend their heartfelt gratitude to Hospice of Santa Cruz for their loving care.

To send flowers to the family in memory of Josephine Puhera, please visit our flower store.