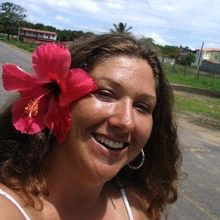 Lillian Valera Hungerford died suddenly on Thursday, August 17, 2017 in Union Gap, WA.
Chili Lili, as she was known to her friends, was born Oct 19, 1974 in Ft. Worth Texas to Terry Lee
Hungerford (Andellyn) and Judith McDonald and raised in Watsonville, CA. She is survived by her parents, her son Adrian Ramirez, Sisters Celeste Doyle (Patrick), Bethanye McDonald (Luke McGillic),
Lena Smith (Dale), Alexandria Hungerford and Molly Hungerford; and numerous aunts, uncles, nieces and nephews.
Lili was a graduate of Eastern Washington University where she majored in History with minors in Africana and Chicano Studies. For her thesis work on slavery, she traveled to Brazil to add Portuguese to her already bilingual skills.
After graduating, Lili focused her efforts on helping others through various programs including La Puente Project (outreach program for underserved middle school youth), The College Bound Foundation (SE Washington's College Bound Scholarship Program) and the TRIO Student Support Services at Walla Walla Community College and at EWU.
Coming to Yakima in 2013, Lili settled in as a bail bonds person, working quickly to get people released from custody and reunited with their families. But more than just a bail bonds person, she counseled those families on the process and kept their children entertained during a stressful time.
Having been moved by a local drowning incident, Lili also became a swim instructor and lifeguard at the Yakima YMCA. Her energy to help the less fortunate and desire to help others was unparalleled.
Unfortunately, even though she was known as a colorful, compassionate and charismatic woman, Lillian was also a prisoner of her life-long battle with depression. She chose to end her battle and silent suffering of this lifetime.
A Celebration of Life Ceremony will be held Saturday, October 21, 2017, at 11:00 AM at Ave Maria Memorial Chapel in Watsonville.