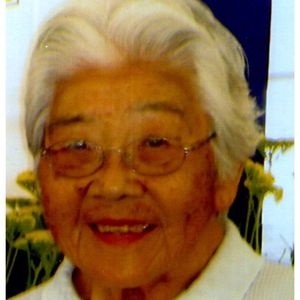 On Friday, November 6, Lois Ota passed away in her home following a lengthy battle against cancer at the age of 93.
She was born in Gilroy on June 27, 1922, the third child of seven. She attended elementary school in San Juan Bautista and La Selva Beach, and graduated from Watsonville High School in 1940. There she was active in the Chorale and Scholarship and Spanish Clubs. She worked in farming before and after school as well as attending Japanese school.
Following high school she worked in Monterey as a nanny and cook for a family, and in the canneries. In 1942 she was relocated due to the Japanese Internment mandate to temporary lodging at the Salinas Rodeo Grounds and finally to Poston, Arizona with her entire family. There she helped teach elementary students and work as an aide in the hospital.
Following WWII Lois held various jobs in Watsonville and San Francisco, eventually marrying Zenichi Ota in 1957. Their son, Zane Katsumi, was born the following year.
Lois served as the secretary for the JACL (Japanese-American Citizen's League) and editor for the YBA (Young Buddhists' Association) News.
Lois was known by all as a modest, sweet, gentle and generous soul - always supporting and gifting school teachers and community workers. She enjoyed crafting, sewing and crocheting and made a wide variety of gifts and food for friends and family.
Lois leaves behind her sister Ruth Ikeda (Salinas), sister-in-law Nina Kimoto (Watsonville), as well as son, Zane and daughter-in-law, Holly and her pride and joy granddaughters, Allison and Sydney. She was preceded in death by her husband Zenichi in 2009.
The family extends its appreciation for exceptional health care from Dr. Robert Weber, Dr. Joseph Robb, Stanford Medical Center and Hospice of Santa Cruz County.
In lieu of flowers donations in honor of Lois' memory can be made to the Watsonville Buddhist Temple or to Hospice organizations.

To send flowers to the family in memory of Lois Ota, please visit our flower store.