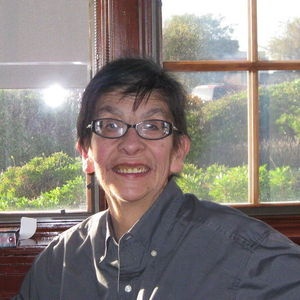 On February 22, 2015, Lucila (Lucy) Rubalcava, beloved daughter, sister and aunt, passed away peacefully surrounded by her mother, sisters, and brothers at Watsonville Community Hospital. She was 65

She had been a resident of Watsonville since 1964 and lived at the family home with her mother and siblings until her passing. Lucy worked at 2 local pizza restaurants for about 15 years until health issues no longer allowed it. She loved collecting Elvis music and movies and had sizeable libraries of both. She was a diehard fan of the Giants and the 49'ers. She was a devoted daughter who did the shopping for her mother and drove her to doctor appointments. She also loved to cook on her grill.

Lucy is survived by her mother Elvina, sisters Elvia, Yolanda, Leticia, Eugenia, Cecilia, and Grace, and brothers Salvador, Antonio Jr., and Jorge and numerous nieces and nephews. She was preceded in death by her father Antonio Sr., and sisters Patricia and Irene.

To send flowers to the family in memory of Lucila Rubalcava, please visit our flower store.