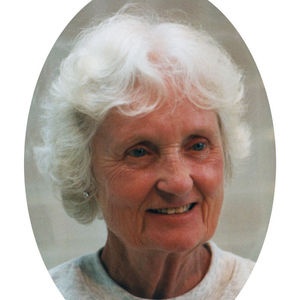 Margaret Jean Richardson Elliott was born November 15, 1928 in Pittsburgh, Pennsylvania and went home to be with the Lord on April 21, 2014. At age sixteen she began the nursing program at Saint Margaret's Memorial Hospital in Pittsburgh, Pennsylvania. She completed her training program and worked as a registered nurse for over forty years. Margaret, known as Peggy Jean or Peg, married William Elliott on December 24, 1950 and had five children. They moved to Mountain View, California in 1963 where she and her husband were active members of First Baptist Church of Los Altos. In 1989 they moved to Watsonville, California to build a house on a ten-acre farm they had purchased and became members of Twin Lakes Church in Aptos. They were also at First Baptist Church of Watsonville for a number of years and were involved there. Peg was an avid seamstress, enjoyed decoupage and crafts, sang in a swing band in her youth, and was a first-class whistler. She loved Jesus Christ with all her heart. Having little children around her was her biggest delight and God gave her the gift of many grandchildren and great-grandchildren to surround her.
Peg is survived by her husband, William Kerr Elliott, her daughter Margaret Campbell, and her four sons: Steven, Clayton, William, and Stuart. She is also survived by her twenty grandchildren and sixteen great-grandchildren who all love the Lord.
A memorial service celebrating Peg's life will take place Sunday, April 27th at 2pm at Twin Lakes Church in Aptos, California. In lieu of flowers, donations can be made to the FCA: Fellowship of Christian Athletes, Twin Lakes Church 20/20 Building Project, and the Gideons.

To send flowers to the family in memory of Margaret Elliott, please visit our flower store.