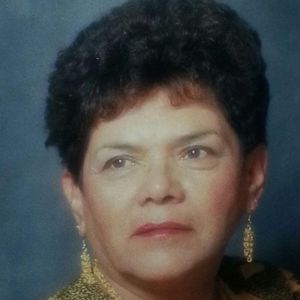 Margarita P. Gonzalez was born in San Marcos CA, a suburb of San Diego, on June 9, 1924 and passed away peacefully on March 21, 2014.
Margarita and her husband, Jose Guadalupe Gonzalez were hard workers throughout their lives. During their working years, they were involved with farming, growing and harvesting apples, strawberries, berries and other fruits and vegetables. During the 1980's, Margarita was also the co-owner and operator of "Violet's Dress Shop" on Main Street in Watsonville. Margarita and "Lupe", as she fondly called her husband, settled in Watsonville in the late 1940's with their first four children. They had been living in El Centro, CA, which is located within the warm Imperial Valley in Southern California.
After raising their twelve children, they began to enjoy life more. They loved going to casinos, traveling to faraway places and dancing whenever and wherever they could. When their grandchildren started arriving, they were ecstatic with happiness.
Margarita was preceded in death by her beloved husband, Jose Guadalupe Gonzalez and their daughter Violet Gonzalez who passed away when she was four years old.
She is survived by her 12 children; Gregory, Moises, Guadalupe, Felicia, Margaret, Paula, Leticia, Hilda, Mario, Barbara, John and Marina. She also leaves behind four daughter-in laws, six son-in-laws, two brothers, one sister, over thirty grandchildren, many great-grandchildren, a handful of great-great grandchildren and many nieces, nephews and friends.
A loving and very caring mother with an infectious sense of humor, Margarita will be missed by all that knew her and especially her family and those that were close to her. Rest in peace and God bless you Margarita P. Gonzalez. You are now in our Lord's hands.
Please join Margarita's family at Ave Maria Memorial Chapel, 609 Main Street, Watsonville, on Wednesday, March 26, 2014 for a viewing beginning at 5:00 PM and for a citation of the Rosary at 7:00 PM. Graveside services will be held on March 27, 2014 at Valley Catholic Cemetery, 2401 East Lake Avenue, Watsonville, at 10:00 AM.

To send flowers to the family in memory of Margarita Gonzalez, please visit our flower store.