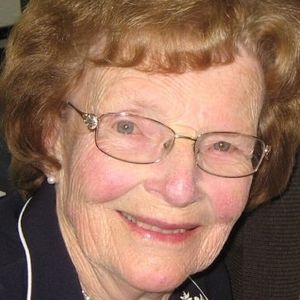 (Mary) Martha Price was born November 10, 1926 in Cottonwood, Arizona to Christian and Mabel Sailer. She attended first through eighth grade in Clemenceau, Arizona. During her early years she enjoyed working on the Sailer chicken ranch. The family was active in their church and worked to reach their community with the Gospel.
Martha's parents wanted their children to attend a christian school. They learned of Monte Vista Christian School from a visiting minister. With God's leading her brother, John Sailer, attended Monte Vista first, while Martha followed him two years later as a freshman at the age of 13. In 1944, Martha graduated from Monte Vista as the valedictorian of her class. Both Martha and her brother John, remained at Monte Vista their entire lives were they were pivotal in establishing the solid Christian foundation that exists today.
It wasn't long until Don Price noticed this quiet, beautiful, senior class student who would become his wife of 55 years. Martha knew God was calling her to serve alongside her husband. Don and Martha married in December 1944, beginning their leadership role at Monte Vista Christian School where they touched lives for over 75 years.
During her years at Monte Vista, Martha served in many capacities while completing her degree at San Jose State University. Martha was loved by the faculty and student body as a teacher, an administrator and a faithful prayer warrior. She and Don also became "Mom and Dad" to many students and influenced them with Godly character and standards. Through humility and faithfulness, Martha's (and Don's) goal was to reach others for Christ. Together they never lost sight of their purpose.
Don Price preceded her in death in 1999. Martha leaves behind 2 children Rob Price and Leah Lebeck and (Dale Lebeck), 5 grandchildren and 11 great grandchildren. Over the years her children and grandchildren grew up at Monte Vista, while her great grandchildren have enjoyed playing at her house creating special memories. Martha's family was her ultimate joy and pride. Now that she is home with her Heavenly Father, Martha's Godly legacy will continue to live on through her family, friends and the many lives she touched.
Please join us in Celebrating the Life of Martha Price on this Friday May 11, 2018 at 3:30pm at Monte Vista Christian School Gymnasium. In lieu of flowers, please make contributions to the Don and Martha Price Music Scholarship at Monte Vista Christian School.

To send flowers to the family in memory of Mary Price, please visit our flower store.